NBA with some playoff ties and 22 teams

Having to readjust to the new conditions and still needing to define the teams who advance onto the playoffs, NBA approved last week the new format of the final stretch of the regular season. Now each game will be decisive, and even a possible playoff clash might be coming up. Take a look!

FINAL STRETCH BEFORE THE PLAYOFFS

One of the worries of the league’s organizers was how to adjust the schedule, since the teams didn’t have the same amount of games played. The teams had between 63 and 67 games played, and there was a difference so that they could reach the playoffs.

The solution was reformulating the number of games and leaving every team in the same conditions from now on. Each team will have a total of 8 games to play until the end of the regular season, maintaining their record prior to the pandemic.

That way, the top 7 teams of each conference will be automatically classified, while the 8th top team must have at least a 4-game difference to the 9th placed team.

In case the distance is lower, 8th and 9th place will play in a playoff tie where the 8th placed team will need to win at least 1 game while the 9th must win 2.

Aspects such as games that were still supposed to take place originally, exclusion of games against eliminated teams, (theoretical) power struggles to adjust the difficulties for each team and balancing of the games for each team.

That way, each team will have 4 games as hosts and 4 games on the road symbolically (since the court is neutral and there is no crowd).
There will be 13 teams from the Western conference:

There will be 9 teams from the Eastern conference:

WHO WILL HAVE THE TOUGHEST ROAD TO THE PLAYOFFS?

The wait is over and now we already know the schedule of what’s coming up in the NBA. On July 30th we will see the teams starting to fight for the title and we will already have the clash between the two teams from Los Angeles, LeBron James’ Lakers and Kawhi Leonard’s Clippers.

On the same day, we will have Donovan Mitchell’s Utah Jazz facing off against Zion Williamson’s New Orleans Pelicans.

Taking into consideration the path there is to go until the end of the regular season, those teams who were fighting for the last playoff spots will have the biggest complications, since the rotation will be less consistent, because it’s more than a question of finding playing rhythm. 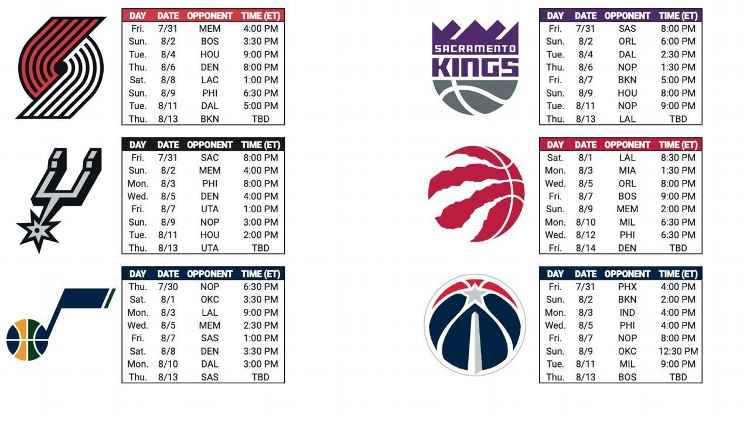 On the Western side, direct encounters between Grizzlies, Blazers, Pelicans and Spurs, should heat up this final stretch. Besides those who feature the best teams, such as the Bucks, Raptors, Lakers and Clippers.

On the Eastern side, the Nets will have to face Bucks, Celtics, Clippers and Blazers. The Magic will have to go through Celtics, Pelicans and still the direct matchup against the Nets.

As for the Wizards, they are underdogs, because they will have to face Bucks, Celtics, Pelicans and still have to deal with a direct encounter against the Brooklyn Nets.

NBA ALLOWS NAME SWAPPING ON THE SHIRTS AS A PROTEST

A decision that was made this week will allow players to have permission to take their names off of their shirts, so that they put in words of social justice in their place.

A lot of the NBA players were recently motivated by the recent case of George Floyd’s death in another case of police brutality in the country against a black man. The league is planning to allow the players who want to do it to join in the protest.

ALARM SOUNDING WITH THE INCREASE OF COVID CASES

The restart of the competition is already confirmed for July 30th, but the recent numbers announced about the increase of COVID-19 cases in Florida leaves the organizers alert.

Every player will come into a “bubble”, on the Disney complex. A series of rules was imposed by the organizers, such as bathing only in the rooms, visits to other players’ rooms forbidden, no shirt-swapping, etc.

The families will be able to make a visit after the end of the regular stage, but only after also going through a small “quarantine”. The NBA will return in the end of July, and NewBettingTips will bring you the best tips and predictions for these games. Follow us!

The welcome bonus offer give you 100% on your initial deposit value, up to 122 Euros

The welcome bonus offer gives you an 100% Freebet over your initial deposit up to a maximum of 30 €£$.

The welcome bonus offer give you 100% on your initial deposit value, up to $60 in betting credits.